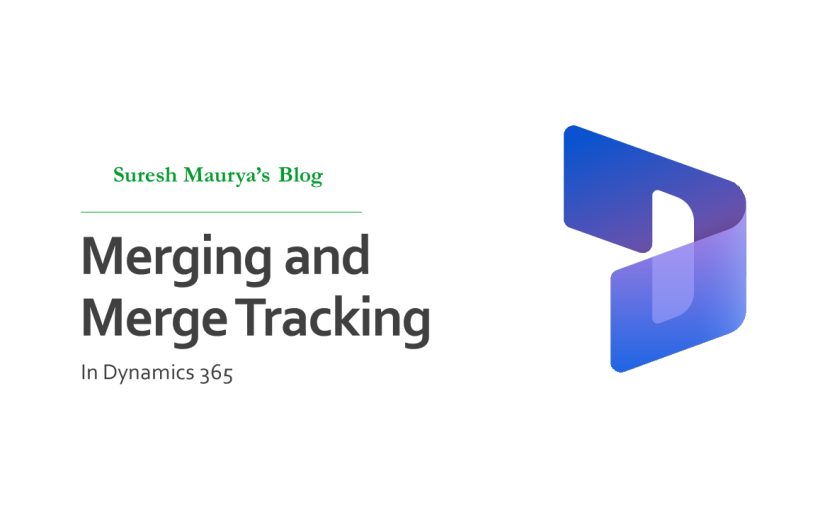 In Dynamics 365 we capture data and data can easily become duplicate for multiple reasons such as bulk record import.

Microsoft Dynamics 365 provides OOB merge functionality which is quite helpful in deduplication of the records and cleaning up the data.

Merging process in Dynamics 365 takes two records of same the entity, the Master record and the Subordinate record, and you specify which is the master record out of two.

In this blog we will cover:

Merge process in Dynamic 365 for account, contacts and leads.

When you choose to merge Accounts, Contacts or Leads you are presented with following screen.

On the merge screen you are also presented with following options which we will discuss later in this blog.

When you have chosen the master record and fields, you can click on Ok to merge.

Merge process in Dynamics 365 for incidents.

For merging incidents you notice few differences such as:

There are multiple triggers to initiate merging process such as:

Manual selection of records in grid

In manual merging you select two records in grid and then click on Merge button to launch merge screen.

We can set up duplicate detection rule, which will launch the merge screen if duplicate records are detected as per the rule.

You can merge records programmatically by calling MergeRequet message available in the SDK.

The following example in C# shows how we can merge two record using MergeRequest message.

Note: UpdateContent property will not be applicable to incidents and will be ignored.

The following example in TypeScript shows how we can call the Merge Action available in the Web API to merge records.

The new enhanced merging experience and options in Dynamics 365.

When you select two records (Contacts in this case) in grid and click on Merge button following screen appears which has a few new options.

The merge screen provides few new options, and provides opportunity to choose fields from master or subordinate records which will be saved finally on master record.

and on completion success message appears as following.

The selected records are merged and subordinate record is deactivated.

As you can see the new enhanced merging experience provides four new options as following:

Let’s discuss each of them.

Select all fields in this section

If you select this, then all the fields under this section will get selected. This is helpful if you have many fields under a section to select.

If this option is checked and the records have different parent Accounts, then on merging following error will be thrown.

Unable to merge because sub-entity will be parented differently. You can disable the parent check prior to execution as part of Merge dialog.

Limitations of merge functionality in Dynamics 365.

In Microsoft Dynamics 365 merging feature is great but has some limitations too.

Let’s check some of the important merging limitations you should be aware of.

After merging, subordinate record shows the notifications similar to the following.

The record was merged with {record name}, and the deactivated.

The notification on the subordinate record provides a link to the master record.

But on master record there is no such link to subordinate record.

So there’s no quick way to navigate to subordinate record from the master record.

How merged notification is displayed on subordinate record?

Please note, these fields will not be updated on the master record and because merge is not available on other entities you will not find these fields on entities other than Account, Contact, Lead and Case.

When merge happens, fields on subordinate record will be updated:

Merged: Will be set to true, to indicate this record has been merged with another record.

Master ID: Will be assigned reference to the master record.

Let’s try now to find the merged records from the advanced find.

As you can see these fields are not available in advanced find, so we cannot filter records to find merged records through advanced find.

These fields are not available even through Add Columns in view, so we cannot see the fields them in grid.

We know if fields are not available through advance find, they may have searchable option set to false in field editor. Let’s check that.

Searchable option on fields is used to show/hide fields from advanced find, if searchable is false then field will not appear in advanced find.

Merged field, searchable is disabled in the classic field editor.

Let’s check through Power Apps portal, as some features are available there.

Merged field is editable so checked and saved.

Master ID field is also enabled, so checked and saved.

Merged and MasterId fields are still not available in advanced find, why?

So, that means we cannot find merged records using views with filter on merged field.

Since we don’t have views with merged field filter we cannot create visualization for the merged records.

We cannot find merged and masteid in classic form editor.

You can see fields are not available even in modern forms to add.

Querying Dataverse for Merged and MasterId

Let’s see if we can query the Dataverse using following FetchXML.

FetchXML is filtering records based on merged field.

Yes, we are able to query through FetchXML, and we can see

Merged is true for subordinate record.

MasterId is set to the Id of the master record.

If you need to find master record, you can do joins on masterid field.

So we are able to get the results with Web API as well.

So far we have learned OOB merge behaviour and some of the limitations of merging in Dynamics 365, let’s try to extend the merging functionality using some customizations.

We will try the following to extend the merging usability:

As we don’t have OOB way of creating view for merged records, let’s try to create by editing FetchXML.

And you will see the view with merged records.

From view we can observe the following:

Let’s try to activate the inactive subordinate record in above view and let’s see what happens.

And the activated record has gone from the view.

Subordinate record is removed from the Merged Contacts view because it’s no longer Subordinate and has following effects on Merged and MasterId fields on activation.

Because we have Merged Contacts view available now, we can create nice visualization using that.

I was not able to successfully display Merged and MasterId on forms, If you are able to please share.

Let’s do the custom implementation for this.

I have added following two fields on contact, you may try as per your need:

After merging open contact record and observe Subordinate and Merge update Content field. Should be similar to following.

Merge Update Content field contains what field data is moved to master from the subordinate record.

Security considerations for Merging in Dynamics 365.

Merging in Dynamics 365 is very powerful but there might be unintended consequences, there are a few security consideration you should keep in mind while merging as explained in Microsoft docs:

Merging is tracked by two hidden fields in Dynamics 365, we explored what are those two fields and how we can surface then into a view so that those fields are easily accessible and facilitates in creating the visualisation on top of that.

We went ahead and wrote a plugin to keep track of merged record and fields onto the master record.

I hope you liked this blog post about merging and how we can leverage the hidden features of merging, please share your thoughts or anything to improve.